Originally from Schenectady, Mike Krywulych is a 2012 graduate of SUNY Schenectady’s Business Administration program, and now works for Mutual of Omaha insurance company. Mike said he remembers participating in Speed Networking, where business professionals visit campus and conduct mock interviews and discussion sessions with students to provide them with techniques and feedback to assist them when they go on actual interviews and participate in networking events for employment. “When I was a student at SUNY Schenectady, this event definitely helped me,” said Mike, who went to earn his bachelor’s degree in Finance from Siena College in 2015. “In my role with Mutual of Omaha, I need to think quickly on my feet with clients, CEOs of companies and this event definitely helped me develop the skills to do that.” Mike interviewed students during Speed Networking, a program developed by the Career and Transfer Services Office, which won the Best Practice Award by the SUNY Career Development Organization. “I have a lot of respect for this institution,” Mike said. “It gave me the firm foundation that I needed.”

Daniel Pierce has a drive to help people when they need it most and satisfy his need for being in the midst of the action at the same time. “I want to have the ability to help people in dire circumstances when they desperately need the help and can’t provide for themselves,” he said. Daniel graduated from the Emergency Management Program in 2016 and plans to transfer to Russell Sage College to pursue a bachelor’s degree in Nursing. His plan is to enter the field of emergency or trauma nursing. Daniel was the 2015-2016 President of the SUNY Schenectady Student Government Association, and the featured speaker during the Spring 2016 Commencement. 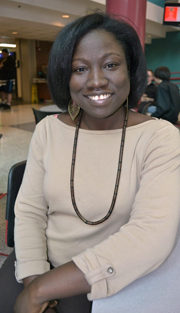 Shantal Plass’s family in Guyana always knew that it was her dream to study in the United States. She was an international student who came to live in the U.S. in January 2014, and started at SUNY Schenectady at the same time while living in Niskayuna. Shantal graduated with an A.A.S. in Accounting in 2016, and attributes her success to her family here and in Guyana, who motivated her. “I want to be able to have my family comfortable both present and future, so that I can be someone they turn to in times of need,” she said. Shantal plans to transfer to a four-year college to continue her studies in Accounting. Her plan is to eventually earn an MBA and become a CFO of one of the Fortune 500 companies.